‘We lost Greenville’: Dixie Fire wipes out much of Northern California community 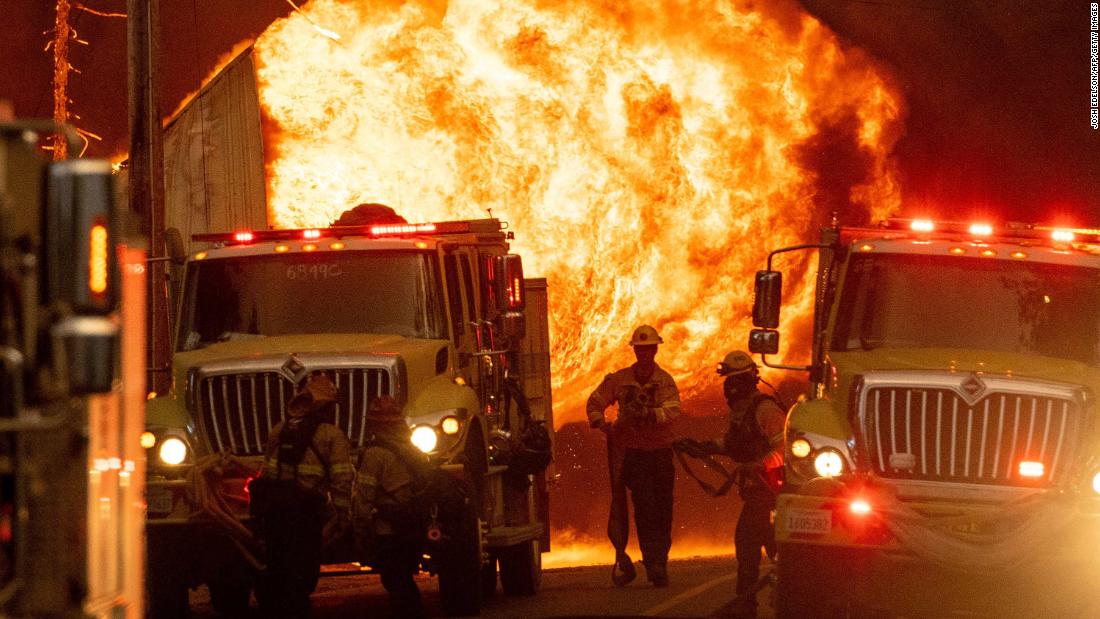 (CNN) The Golden State’s largest active wildfire has wiped out much of the Greenville community in Northern California, sweeping through Wednesday at alarming speed and endangering anyone who did not heed evacuation orders, officials said.

Fierce winds pushed the Dixie Fire well east of its previous footprint, and flames quickly overtook businesses and homes in Greenville, a Plumas County community of about 1,000 people roughly 150 miles north of the state capital, Sacramento.Flames raced into the community from a wooded mountainside, Greenville resident Teresa Clark told Sacramento TV station KXTV .”Within two hours, our town was gone,” Clark, who left before the fire swept through, told KXTV on Wednesday.”We were sitting outside town about a mile away, and you could hear propane tanks just exploding.” Firefighters work Wednesday as flames engulf a home in Greenville.Responders on Wednesday evening were still working to get everyone out.

Exactly how many wasn’t clear.Read More “Right now, there are still a lot of people unfortunately in Greenville that did not evacuate.

And so, we are having to deal with that …and get all those folks out,” said Jake Cagle, the operations sections chief for California’s fire incident management team.The climate crisis is making more destructive wildfires increasingly common.

The Dixie Fire is one of 12 large active fires in California that have seared more than 475,000 acres so far, according to the National Interagency Fire Center .Much of Greenville was in charred ruins Wednesday — burned and fallen to the ground as thick smoke largely made for a dark, gray atmosphere — daytime video showed.

In the community’s commercial center at Main Street and State Route 89, nearly every business appeared to have collapsed or been gutted, with flames still flickering in the debris up and down the sides of both streets, video recorded by Brandon Clement showed.A firefighter passes the Sierra Lodge on Wednesday as the Dixie Fire burns through Greenville.Elsewhere, flames were consuming frames of buildings that had yet to entirely collapse as thick smoke blotted out.Other footage from nighttime showed fires raging through wooded terrain, consuming tall trees and lighting the sky with enormous flames.

In one spot, furious flames of yellow, orange and red consumed an SUV — its outline barely visible — as trees and a building also burned around it.”Early indications are there has been significant damage,” Brian Ferguson, spokesman for the governor’s Office of Emergency Services, told CNN in a phone interview.In an emotional video posted Wednesday on Facebook , US Rep.Doug LaMalfa, who represents the area where the Dixie Fire is burning, said more needs to be done and more attention needs to be paid to what fires have done to communities — not just this year but also in previous ones.”We lost Greenville tonight.

And there’s just not words for how us in government haven’t been able to get the job done,” LaMalfa said.”We will take up the fight even harder.And more so, we got to win this; we got to stop this.

It was 35% contained as of Wednesday night, Cal Fire said.The fire was being pushed by gusty winds in dry conditions Wednesday, according to Cal Fire .A red flag warning — which cautions that temperature, humidity and wind conditions combine for high fire danger — was in effect for the area Wednesday and will be for parts of Thursday, according to InciWeb, a US government clearinghouse for fire information..