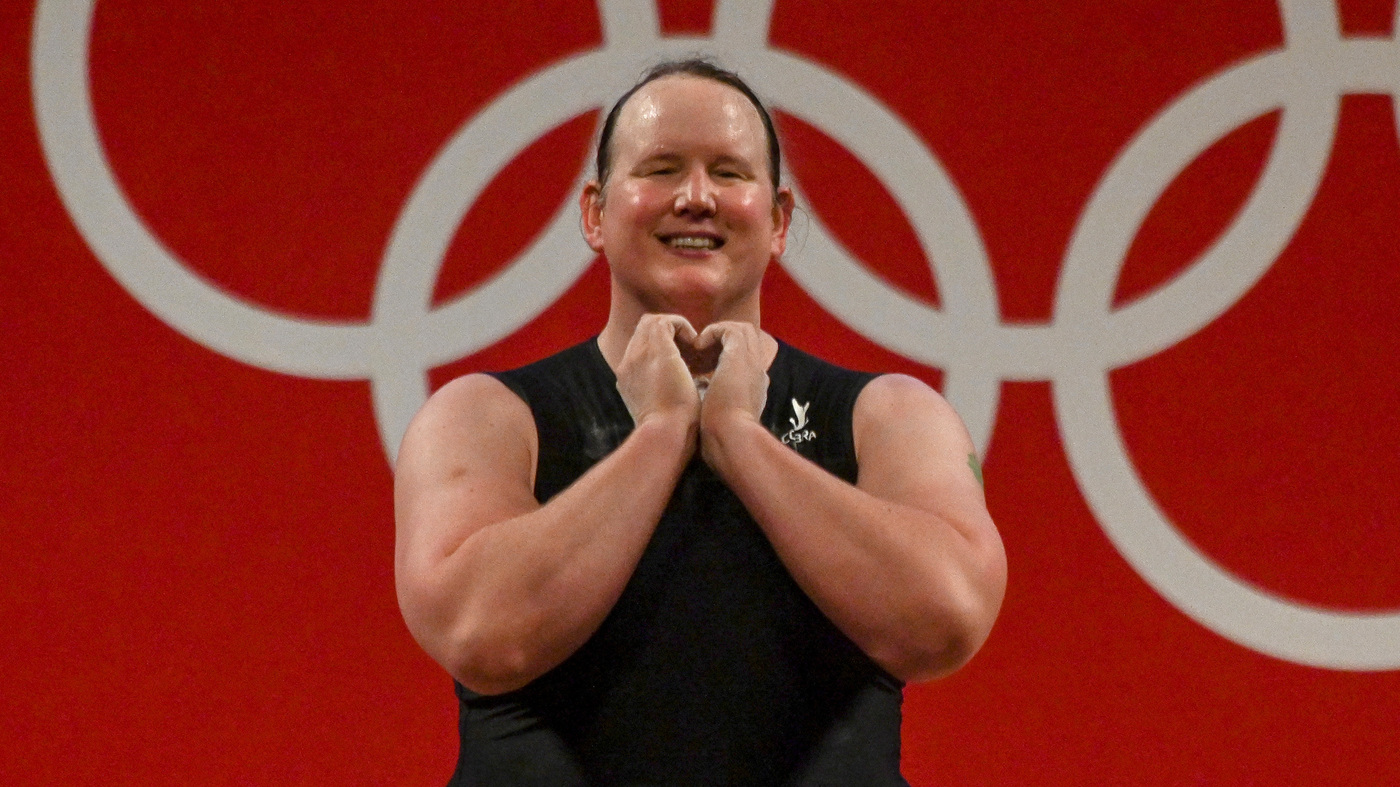 Enlarge this image After making history Monday, weightlifter Laurel Hubbard thanked the International Olympic Committee “for living up to the Olympic values and showing that sport is for all and that weightlifting can be done by all types of people.” Swen Pförtner/dpa/picture alliance via Getty Images Swen Pförtner/dpa/picture alliance via Getty Images

After making history Monday, weightlifter Laurel Hubbard thanked the International Olympic Committee “for living up to the Olympic values and showing that sport is for all and that weightlifting can be done by all types of people.”

Swen Pförtner/dpa/picture alliance via Getty Images Laurel Hubbard has made history by becoming the first openly transgender athlete to compete in an individual event at the Summer Olympics.The New Zealand weightlifter did not make the podium, after failing to advance to the final.

Competing in the 87+kg class on Monday, Hubbard struggled to lift 125 kg (275 pounds), putting her out of the running.Her official result is “did not finish,” as she bowed out after failing to record a clean lift in the snatch section of the two-part competition.

Hubbard had seemed to successfully lift the weight in her second of three attempts — but in a split decision, the judges ruled she had not held the bar steady above her head.

Sports Openly LGBTQ Olympians Would Rank 14th In Medal Wins If They Were A Country Despite failing to reach the final round, Hubbard smiled and cupped her hands together in a heart gesture before walking off the stage at the Tokyo International Forum.

“My performance wasn’t what I had hoped, but I’m humbled by the support I’ve received from so many people around New Zealand,” she said , adding, “I am aware that my participation has been controversial.”

“Thank you to the IOC for living up to the Olympic values and showing that sport is for all and that weightlifting can be done by all types of people,” Hubbard said.

In her emotional farewell, Hubbard also thanked Japan for hosting the Games, according to her country’s Olympic committee.

Trans Athletes Have Reached New Heights in Tokyo Hubbard joins Canada’s Quinn, a midfielder on the national soccer team who is transgender and nonbinary, in reaching new heights for trans athletes at the Tokyo Games.Quinn, a veteran of the women’s team who came out last year, recently became the first openly trans person to compete in an Olympics.

Hubbard made headlines when the International Olympic Committee cleared her to compete — a decision that has sparked both support and criticism.

For her part, Hubbard has welcomed the chance to compete on the world stage while also showing her true self.

Sports New Zealand Weightlifter Will Be The First Openly Trans Competitor At The Olympics “I commend the IOC for its commitment to making sport inclusive and accessible,” she said on Friday .After Monday’s loss, Hubbard also thanked the International Weightlifting Federation, or IWF.

“They have been extraordinarily supportive,” she said.”I think that they, too, have shown that weightlifting is an activity that’s open to all the people of the world.”

She Took 15 Years Off From Lifting When she was in her 20s, Hubbard was a rising star in men’s weightlifting, but she quit the sport, she recently said , after struggling with “the pressure of trying to fit into a world that perhaps wasn’t really set up for people like myself.”

She began transitioning in 2012 — and after a hiatus of more than 15 years, she started working toward a return to competitive weightlifting.

Pride Month A Guide To Gender Identity Terms Hubbard, 43, is 10 years older than any other athlete who was in her Group A heat at Monday’s competition.

The gold was won by China’s Li Wenwen, the world record holder in the event.Team USA’s Sarah Robles won bronze.

It’s the second bronze for Robles, who in 2016 broke a long Olympic drought for U.S.weightlifting..