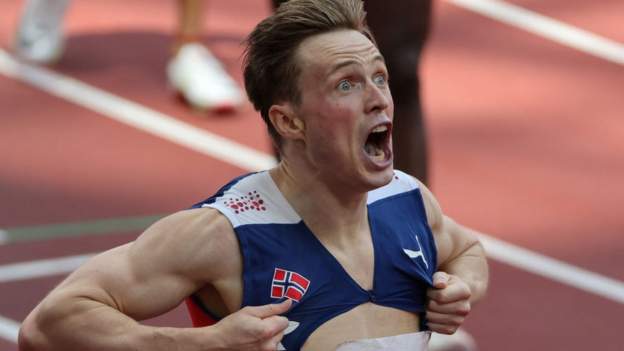 Warholm, 25, finished in 45.94 seconds to slash more than seven tenths off his old record, while American Rai Benjamin was hot on his heels to win silver having also beaten the previous record.

Warholm had set the previous world record of 46.70 in Oslo in July.

Brazil’s Alison dos Santos took the bronze medal with a time of 46.72.

“You know the cliche that it hasn’t sunk in yet? I don’t think it has but I feel ecstatic,” Warholm, who now holds the European, world and Olympic titles, told BBC Sport.

Lego and practical jokes – inside the world of ‘Viking’ Warholm “I can’t believe the time, it’s so fast! A lot of the time I am asked about the perfect race…I said it didn’t exist, but this is the closest I’ve ever come.

“I told myself going into the race, remember all the work you have put in.It was the only thing missing from my [medal] collection.

“I can’t describe how important this is for me.This is what I do morning until night – it’s huge.”

Day-by-day guide to the Games Times and channels for BBC’s live coverage Listen to the latest Olympics Daily podcast Tokyo 2020 medal table Super shoes: Is technology helping to break records? Listen to the Sports Desk podcast Warholm had already broken the world record in July It was tipped to be one of the most exhilarating races at the Games after Benjamin had come within five hundredths of a second of taking the then-world record in winning the US trials this summer.

Warholm established a strong lead when he raced out of the blocks but Benjamin threatened to claw him back before the Norwegian’s final push for the line.

He roared with delight when he looked up at the screen to see his time, ripped his shirt in celebration and posed for photographs next to the new world record.

“This is one of the most outstanding world records and I’m pretty sure that world record will outlive me.

Former 1500m Olympic silver medallist Steve Cram added: “No wonder he rips his shirt apart – he is Superman in this event!

“I cannot believe what we have just seen.

Two men running times you could only dream of.”

‘In my eyes, anyone can be an influencer’: Is social media a viable full-time career at 16? Jerk: Hilarious comedy starring the ‘unsackable’ Tim Renkow.