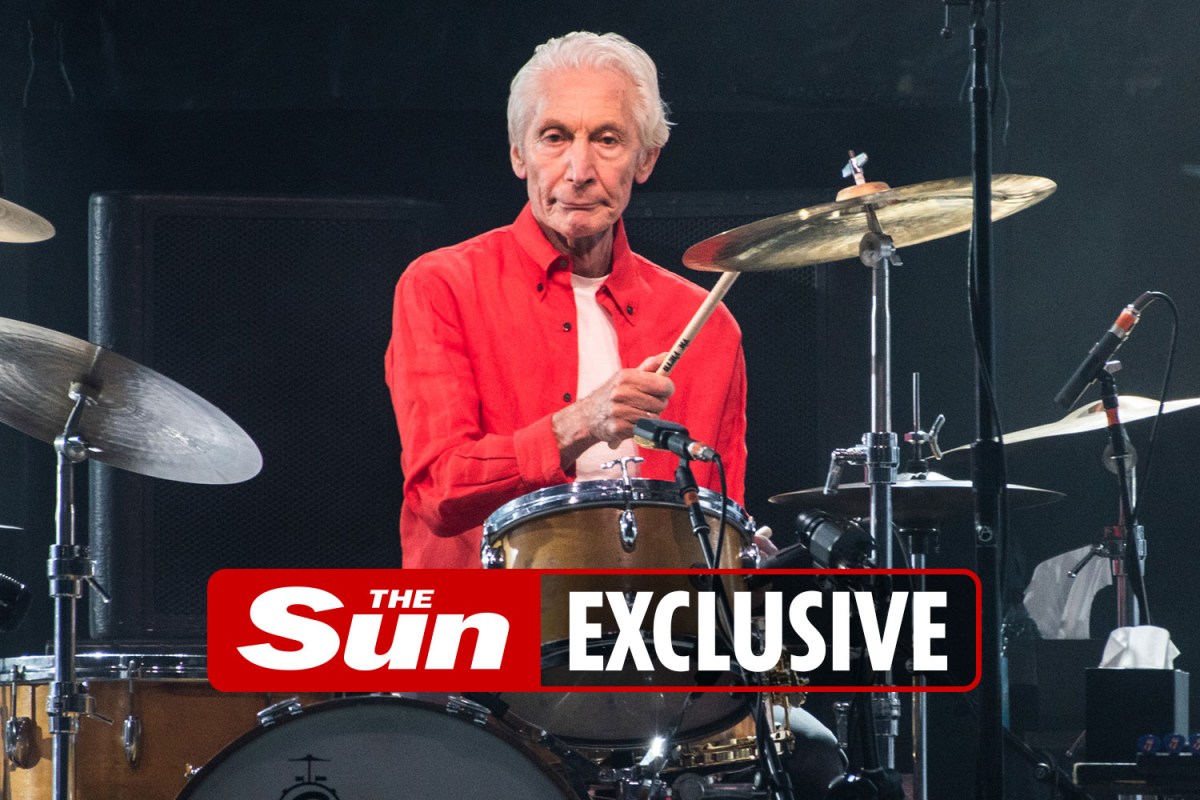 ROLLING Stones drummer Charlie Watts has had to pull out of the band’s US tour after having an emergency op.

The 80-year-old legend had a “successful procedure” in London after a problem was found during a routine check-up.

Charlie — regarded as one of rock’s greatest drummers — joked last night: “For once, my timing has been a little off.”

He will be replaced by hot ­session drummer and friend of the band Steve Jordan — but still plans to rejoin bandmates Sir Mick ­Jagger, 78, Keith Richards, 77, and Ronnie Wood , 74, later this year.

The Rolling Stones aim to have him back fighting fit for the band’s big 60th anniversary celebrations in 2022, when they will release their first album of ­original songs in 17 years.

Watts added: “I am working hard to get fully fit but I have today accepted on the advice of the experts that this will take a while.

For once, my timing has been a little off.

Charlie Watts “After all the disappointment with delays to the tour caused by Covid, I really don’t want the many Stones fans in the States who have been holding tickets to have another postponement or cancellation.

“I have therefore asked my great friend Steve Jordan to stand in for me.”

The Rolling Stones announced the resumption of their tour two weeks ago, with 13 US dates.

Their long-awaited gigs — which were cancelled when the coronavirus pandemic hit last year — wrap up in Austin, Texas, in November.

Jagger said last month: “I’m so excited to get back on the stage again and want to thank everyone for their patience.See you soon!”

But doctors discovered that Watts, who has been with the group since 1963, needed surgery following a routine appointment to check he was fit to tour.

Under doctors’ advice, he now needs weeks of “rest and recuperation” after the procedure was completely successful, said a spokesman for the Sympathy for the Devil stars.

The spokesman added: “With rehearsals starting in a couple of weeks it’s very disappointing to be without Charlie.”

The Rolling Stones are planning for a huge 2022, 60 years after they formed following a historic meeting of Jagger and Richards at Dartford railway station and bonding over Mick’s Muddy Waters and Chuck Berry records.

For the upcoming tour, the band is hiring US drummer Jordan, 64, who has collaborated with Stones guitarist Richards for decades and guested on the band’s 1986 album Dirty Work.

Jordan is a Grammy-winning producer and has also been a member of the X-Pensive Winos — the side project of Richards — since the 1980s.

Though not members of the Stones, Jordan and bassist Darryl Jones give the next dates a rhythm section of two cool ­American musicians.

THE COOLEST STONE Jordan said last night: “It is an absolute honour and a privilege to be Charlie’s understudy and I am looking forward to rehearsing with Mick, Keith and Ronnie.

“No one will be happier than me to give up my seat on the drum-riser as soon as Charlie tells me he is good to go.”

Wembley-born Watts joined the Rolling Stones in January 1963 and has performed on all of the band’s studio albums, along with Jagger and Richards.

He often lived a less raucous life than his hellraising bandmates, famously turning down groupies because of his love for wife Shirley.

In a recent interview with The Sun’s Something For The Weekend, Richards heaped praise on bandmate Watts as the “coolest” Stone.

He said: “Charlie Watts is an amazing man.

“The hardest job in a band is drumming . . . the sheer power and subtlety of the man.

“I go up there just to be able to play with Charlie Watts.He’s absolutely the coolest guy I know, my aim is to get as cool as Charlie.”

In 2004 the musician overcame throat cancer, having quit smoking in the late ’80s.

Afterwards, Watts said: “I went into hospital and eight months later Mick said, ‘We’re going to do a record.But we’ll only do it when you’re ready.’”

For his bandmates, recent health issues include Jagger’s minor heart procedure in 2019 and guitarist Wood overcoming small-cell cancer last year during lockdown  — and getting the all-clear from doctors.

We really look forward to welcoming Charlie back as soon as he is fully recovered.

Mick Jagger Stand-in drummer Jordan has been a close pal of Richards for years, after being recommended to him by Watts for a solo venture.

Richards once told The Sun: “I wanted to spread my wings.­Charlie said to me, ‘If you’re going to work outside the organisation, Steve Jordan’s your man.’

“So, I took Charlie’s advice.Steve and I were already friends.

We’d worked with Aretha Franklin on Jumpin’ Jack Flash.After that, we did the Hail! Hail! Rock ‘N’ Roll movie with Chuck Berry.

“Then Steve and I had the idea we could do something together.

So, we formed the X-Pensive Winos.Mick and I are joined at the hip but I’ve very much enjoyed writing with Steve.

“He’s a drummer and my thing has a lot to do with rhythm.

Steve Jordan’s a piece of work!”

Jagger is also known to be a huge fan of Jordan and Richards even had a recording session with him in New York during the pandemic.

5 Charlie underwent a ‘successful procedure’ after a problem was found during a routine check-up Credit: Rex 5 The iconic band hope to have him fighting fit for their big 60th anniversary celebrations in 2022 Credit: Hulton Archive – Getty 5 Friend of the band Steve Jordan will fill in for Charlie on the band’s 13-date tour Most read in Music

ROLLING ICONS Who are the Rolling Stones members and where are they now? “I did manage to squeeze in a session in New York for a couple of days, with Steve Jordan, but under strictly controlled conditions.It’s hard making a record with a mask on, man.”

Jagger said last night: “We really look forward to welcoming Charlie back as soon as he is fully recovered and thank you to our friend Steve Jordan for stepping in.”

It means that for the world’s greatest rock and roll band, the show must go on!