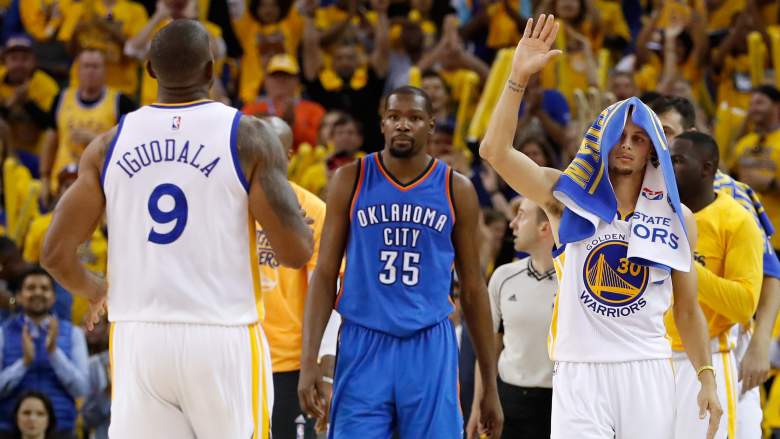 The Los Angeles Lakers are among the finalists to land veteran forward Andre Iguodala, who has three teams on his list.The Lakers, Nets and Warriors are the final three teams that Iguodala is considering, per The Athletic’s Shams Charania .“I’m told 2015 NBA Finals MVP Andre Iguodala has narrowed his playing choices own to the Brooklyn Nets, Golden State Warriors and Los Angeles Lakers,” Charania reported via a clip on Twitter .“Iguodala would provide either of those three teams a winning presence on the floor, as he’s been a part of three NBA championships with the Warriors dynasty.” It isn’t the first time Iguodala has been linked to the Lakers this offseason.ESPN’s Jordan Schultz linked him to LA early in free agency, citing his relationship with Lakers GM Rob Pelinka.“League sources confirm the Lakers and Warriors are both interested in signing Andre Igoudala,” Schultz tweeted .

“Remember, Iggy – who was once represented by Rob Pelinka – said this two years ago on Howard Beck pod: ‘Rob is my man.He’s always been good to me.

My wife loves him.’” Andre Iguodala Still Key Piece for Contending Teams The Miami Heat declined Iguodala’s option for the 2021-22 season, making him an unrestricted free agent.He averaged 4.4 points, 3.5 rebounds and 2.3 assists in 21.3 minutes for the Heat last year coming off the bench.At 37, Iguodala is still highly respected around the league for his defensive abilities and veteran leadership, having been a key cog during the Warriors’ dynasty, guarding LeBron James for much of their battles in the NBA Finals.Iguodala carries quite of respect for James, calling him “top talent ever” before facing off against in the 2020 Finals.“You just got to have that will, understanding you’re guarding the top talent ever,” Iguodala told Marc J.Spe ars of ESPN’s The Undefeated .

“He’s going to make you pay when you make mistakes.You just try to play mistake-free basketball.

Put him in vulnerable situations where you feel like you got the advantage, whether it’s a shot or a pass or where he is defensively.” Iguodala Would be Another ‘Old’ Addition for Lakers The Lakers have added some key pieces this offseason, although most are on the back-half of their careers.Iguodala, 37, would fit right in.In fact, he’d be the oldest on the team.Russell Westbrook (32), Wayne Ellington (33), Kent Bazemore (32), Trevor Ariza (36), Dwight Howard (35) and Carmelo Anthony (37) are all new additions but aren’t exactly part of a youth movement for the Lakers.

James took issue with the criticism surrounding the moves and sounded off in a now-deleted tweet.“Keep talking about my squad, our [personal] ages, the way they play, we’re past our time in this league, etc etc etc!!” James wrote.“Do me one favor PLEASE!!! And I mean PLEASE!!!! Keep that same narrative ENERGY when [it] begins.That’s all I ask.

#ThankYou” The tweet seems like further evidence that James had a hand in building the roster — something Lakers GM Rob Pelinka said would happen at the end of last season.FS1’s Jason McIntyre said on that James was sending a message to his new teammates.“LeBron put this team together,” McIntyre said.“He’s putting on the cape for his guys and letting them know: ‘If you’re on my team, I’ll ride with you.’ This is the greatest player in NBA history, he knows exactly what he’s doing.” If the Lakers were to ink veteran Jared Dudley to deal as expected, there would be two more spots on the roster.

READ NEXT: Lakers Spurned by Former Sixth Man of the Year.