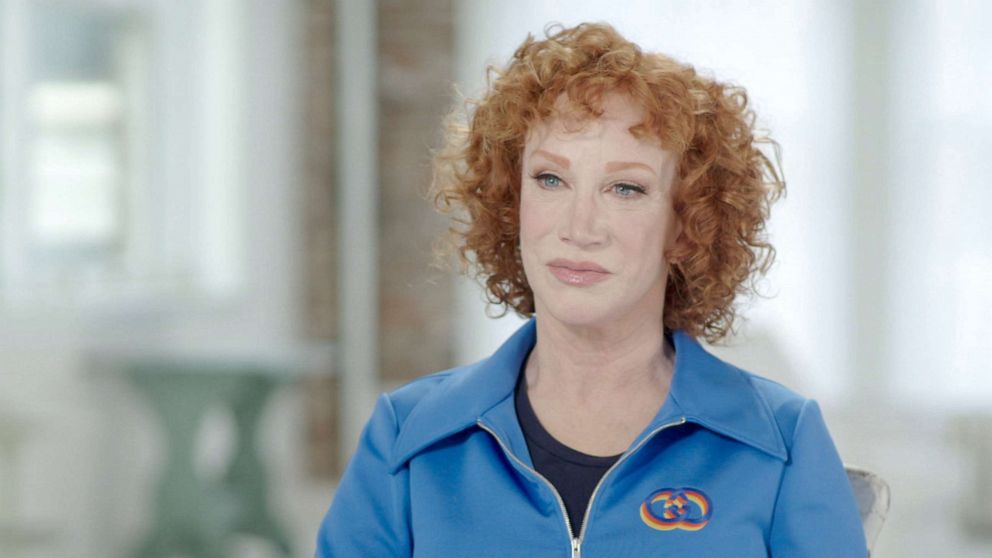 Kathy Griffin battles lung cancer, shares about dark chapter of addiction “Whether I like it or not, I think I’m a resilient survivor,” Griffin said.

Griffin says she was diagnosed with lung cancer only a few weeks ago.”I’m still a little bit in shock,” she said.ABC News Kathy Griffin has had quite a year navigating the darkest chapter of her life, and is now battling lung cancer.She’s used to weathering storms, including living through her fair share of controversy.

The comedian has claimed she’d been banned from various shows over her decadeslong career.

But she says nothing could compare to the fallout she experienced from her 2017 photoshoot in which she held a mask that appeared to be bloodied with then President Donald Trump’s likeness.By June 2020, she was in the throes of a painkiller addiction and even attempted suicide.Yet, she’s still here.

“Whether I like it or not, I think I’m a resilient survivor,” she told ABC News’ Juju Chang in an exclusive interview last week.

Griffin says her life became consumed by the consequences of the Trump photoshoot.

After her career of self-described “in-your-face” comedy, the world apparently deemed that this image had gone too far.

Amid the fallout, Griffin said that she and many people close to her became the target of death threats.She had never had a drink in her life, she said, but she eventually found herself lost in an addiction to pills.

“I thought, ‘Well, I don’t even drink… Big deal, I take a couple pills now and again, who doesn’t?’” she said.

“Also, my age was a big part of it.I mean, who bottoms out and tries to take their life at 59? It’s almost a joke, right, and by the way, someday, this will all be comedy.Trust me… I was laughing to stay alive.And what I found is I felt like if I can’t make others laugh, then there’s no purpose for me to live.There’s no reason for me to live.”

But she did.Now, Griffin is looking to overcome another obstacle, reporting that she has a cancerous tumor in her lung.

“The irony is not lost on me that, a little over a year ago, all I wanted to do was die.And now, all I wanna do is live,” she said.

‘It got out of control’ Griffin launched her “Laugh Your Head Off” tour in 2017 in the wake of the Trump backlash.She sold out shows around the world.

She said her first show on the tour was in Auckland, New Zealand, where someone who she described as a “Trumper” threw a glass bottle at her head.She said she later saw him speaking in interviews, where he appeared to be proud of the attack.

As her tour carried on, she said that behind the scenes, she was crumbling and sustaining her addiction.

“I lost a ton of weight…I wasn’t even aware of … not being able to keep food down because I was dealing with so many things,” she said.“Yet, I had such a drive to get back on stage and show that I couldn’t be taken down.

… It was a really tough time.

It was one of those times where I was on a mission and I was gonna get through it.And it was a very, very gratifying, but very difficult tour.”

Allen Berezovsky/Getty Images, FILE Comedian Kathy Griffin performs during her “Laugh Your Head Off” Tour at Dolby Theatre in Hollywood, Calif., July 19, 2018.Griffin said she was first introduced to pills via Provigil, an amphetamine similar to Adderall, which she had been prescribed by a doctor.

She said she was later prescribed Ambien to help her sleep, and then painkillers after various injuries.

“I really fell in love with them,” she said.“Then, it was kind of the allure of, ‘Oh, I can regulate my energy levels or my moods.

Or …I fell on my elbow in my act or something and I can be pain-free or something.’ And it got out of control very rapidly.”

MORE: ‘I just won’t go down’: Kathy Griffin on fighting her way back after a scandal threatened to end her career Griffin said she was spiraling.Her painful moments were captured in the documentary about her life after the photoshoot, “Kathy Griffin: A Hell of a Story.”

“Those were very real moments, obviously … when I’m breaking down on the plane, I was really convinced that … somebody was gonna harm me or … a mob [was] waiting in this environment, or something like that.I just felt there was impending doom,” she said.“I was already starting to think …

She said she began to believe her critics, and started thinking that there probably wouldn’t be a next chapter.

‘I started thinking about suicide more and more’ Griffin grew up in an Irish Catholic family where she says she was surrounded by “lots” of alcoholism.She says she maintained her sobriety in spite of her surroundings.

“It really wasn’t until later in life that folks from that generation started kind of talking about alcoholism and what it meant,” she said.“I still think that if I would’ve taken a drink, I think I would have become an alcoholic very quickly.”

Griffin said she survived sexual abuse from her late brother, the eldest sibling.She said she had called him out in front of the family.

“It also plays into the idea of wanting to be sort of a whistleblower in my comedy, and say things that you’re sort of ‘not supposed to say,’’’ she said.

“I really credit comedy for saving my life because it’s not just an outlet for me.I truly feel it’s a healer and it’s necessary.

… I feel compelled to do a sort of in-your-face style of comedy.Brutally honest, good, bad or indifferent.”

MORE: Kathy Griffin: ‘Of course’ President Trump ordered her Secret Service investigation For some people, that style of comedy went too far when she posted the video of herself posing with what appeared to be a bloodied mask bearing Trump’s likeness.In the photo, she made a joke referencing a controversial comment Trump had made about then Fox News host Megyn Kelly.She faced swift backlash from critics saying it could be interpreted as a threat of violence against Trump.

Griffin was subsequently fired from her position as host of CNN’s “New Year’s Eve Live” broadcast, her scheduled tour dates were canceled and her friend and broadcaster Anderson Cooper tweeted that he was “appalled” by the photo shoot, calling it “clearly disgusting and completely inappropriate.”

So that one hurt,” she said.

“I think that emotionally, that was the most painful, to have so many friends that, to this day, haven’t called.”

As her friends turned their backs on her, Griffin said she received death threats and that her family was also targeted.

“I mean, legit death threats with everything, from online, which is the Google pictures of the house, the address.I mean, folks showed up to my husband’s parents’ house,” she said.“They tracked my sister down when she was dying of cancer in the hospital and called her …I picked up the call and heard it myself because I happened to be visiting her.”

MORE: Kathy Griffin retracts apology for decapitated Trump photo: ‘I am no longer sorry, the whole outrage was BS’ Although she had issued an apology for the photoshoot, she eventually rescinded it , calling the fallout “faux outrage,” and then went on her comeback tour.It appeared she says she came out of the controversy as defiant as ever, but in reality, she says she couldn’t escape her pain.

“I started thinking about suicide more and more as I got into the pill addiction, and it became almost an obsessive thought.

I started really convincing myself it was a good decision,” Griffin said.

“I got my living revocable trust in order.I had all my ducks in a row.I wrote the note — the whole thing.”

‘The silver lining’ Following her suicide attempt, Griffin said she got in touch with a doctor and her husband helped her get treatment.They went to a hospital where she was placed on a psychiatric hold.

After her release, she said she worked with two clinicians who helped her start on the road to recovery.

Although she’d never had a drink in her life, Griffin said it was through Alcoholics Anonymous meetings that “the clouds started to part.” However, becoming clean posed challenges, too.

“The detox was nasty,” Griffin said.“I mean, it was months.I mean, the tremors … and the flop sweat, and I was so unsteady.Like, when I would brush my teeth, my husband had to hold my hips so I wouldn’t fall over.”

She went on to say, “I would go to, like, two Zoom meetings a day, and the sober clinicians would come over every single day and they would pee-test me.

And every day, my goal was to …test clean.”

Today, Griffin says she’s still in recovery, but will always consider herself an addict.

She is just over a year sober.

She says she has found friendship and support through her recovery community.

“We have this thing in common, and it’s such a mutually supportive environment.I find that very gratifying,” she said.

“I also like that in recovery, when I talk to other addicts, I love that it’s a no-BS kind of a conversation.I mean, you’re talking to other addicts that have been in the hospital or been in jail….There’s not a lot of small talk and I like that.”

ABC News Comedian Kathy Griffin talks to “Nightline” about the fallout from her 2017 photoshoot in which she a bloodied mask in the likeness of then President Donald Trump.

She says she fell into addiction.Griffin said she has a newfound appreciation for life and that she won’t get involved in anything that might threaten her recovery.Now, she plans to let work come to her.

‘Now, all I want to do is live’ Without pills to numb her physical pain, Griffin started to wonder if she had arthritis.She went to a doctor who, she says, noticed a mass that she’d long had on her lung had doubled in size.

“I’ve had it for a long time,” Griffin said about the mass.

“And it gets X-rayed every three years and hasn’t grown.So she said, ‘Well, this time, it grew.”

Griffin says while she’s never smoked, she was nevertheless diagnosed with lung cancer only a few weeks ago.While smoke is by far the leading cause of lung cancer, the American Cancer Society says that there are some risk factors that can cause it in nonsmokers.

“I was definitely in shock.I’m still a little bit in shock.Not denial, but …

So I need to focus on that.”

“I’m about to lose half my lung, and by the way, can I tell you something? When you’re a comic, the doctors all wanna be funny.… I love when they try material on me, like it hasn’t been happening to me for 40 freaking years,” she said.

“He’s like, ‘Well, you know, the lung is actually a couple of balloons.

And so we basically just deflate the lower balloon — remove it.It’s kinda like taking out a used condom.You can use that,’” she said.“And I’m, like, ‘OK.Why don’t you do the surgery and I’ll do the jokes.’”

If you are struggling with thoughts of suicide or worried about a friend or loved one, help is available.Call the National Suicide Prevention Lifeline at 1-800-273-8255 [TALK] for free, confidential emotional support 24 hours a day, 7 days a week.