Javelin craze in India a co-production of Neeraj and me: Johannes Vetter 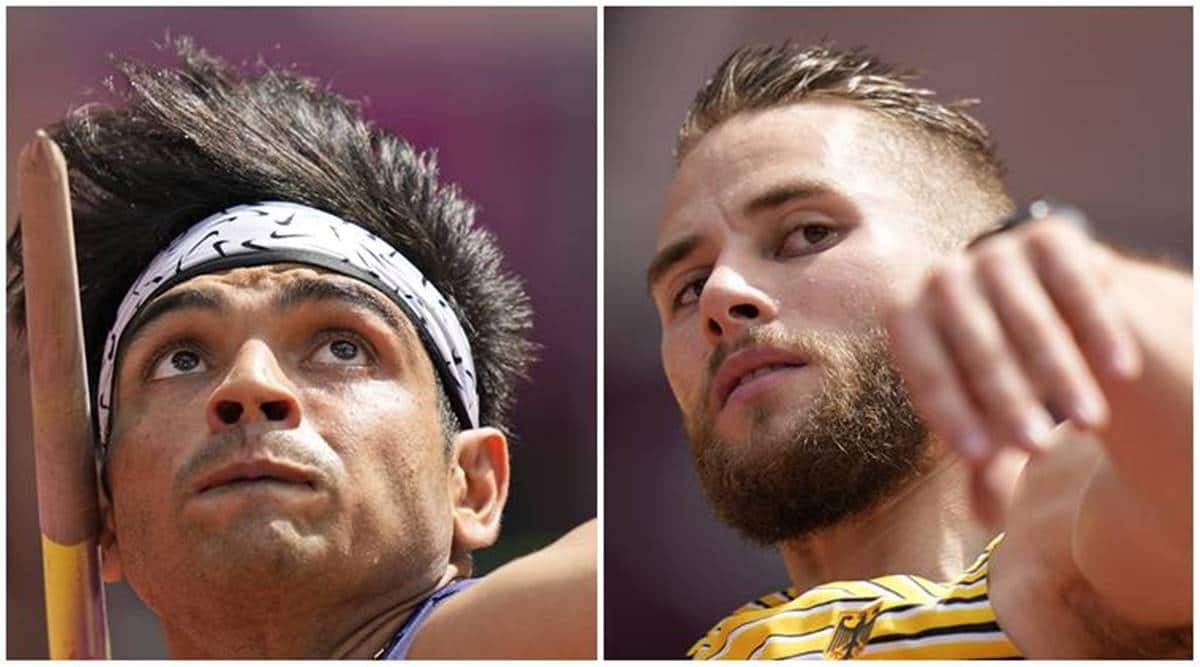 [Andrew Amsan] | New Delhi | Updated: August 6, 2021 5:13:24 pm Johannes Vetter is the favourite to take home the javelin gold ahead of Indian star Neeraj Chopra on Saturday, and for good reason.The 28-year-old German goes into Saturday’s final with seven 90m-plus throws in the run-up to the Tokyo Olympics under his belt — including a season-best throw of 96.29 that is almost seven metres better than the second-best.In an interview with The Indian Express , the former World Champion spoke about his training, life beyond sports, his “sports crazy” father, and also the bond he shares with India’s star thrower Neeraj Chopra.Excerpts: You have been extremely consistent this season.Are you happy with the preparations? Yes, I am going into the Olympics with a good feeling.

I want to throw over 90 in Tokyo as well.The technique is a little stable right now.You need the right balance between being relaxed and being under pressure.

You slammed the organisers of the Gateshead Diamond League calling it a “sh*t” event.Is it important for you as an athlete to be vocal about your opinions? It’s not that I am protesting just for me, I am doing it for all the javelin throwers worldwide to make things better.I think the voice of athletes should be louder.We have to go into discussions to develop and improve the sport.

At Gateshead, the surface was too soft for javelin throwers and the time between throws was too long.

The people who organise these meetings should think about the athletes.

A soft surface can pose a risk for athletes, especially a javelin thrower.You seem very pally with your competitor Neeraj Chopra.You even shared a car ride from Helsinki to Kuortane with him.What do you think about him as a person? I really like him.He’s very friendly and open-minded.During our car ride, we did not talk a lot about javelin.We spoke about family, private life and discussed how things are going in Germany and India.It is really interesting to learn something new about people all over the world.

He’s doing pretty good and I really respect what he is doing for the sport, especially javelin in India, cause it’s getting more popular in the country.What did Neeraj tell you? We spoke about everything.What the situation in India is like.What being a professional athlete in India is like.The food and things like that.He told me that I have to come to India and train with him because I have a lot of fans in India.I told him I have to see how it works and maybe in the future we will see how to organise it.But I would really like to visit India, of course.

How was it training for the Olympics amid the covid-19 pandemic ? Fortunately, the situation is good in Germany right now.We could travel to competitions, of course, you have to do a lot of tests and do a lot of paperwork to visit different countries.It was a busy year compared to the previous years but I am happy it worked so well.

You are very close to the superhuman 100m mark.How do you feel about that? Right now I am just focussing on the Olympics and not the world record.I think that it is possible to throw that far.But there is nothing you can plan since javelin is so difficult.It’s the technique.

It has to go 100 per cent in the right direction and it is really hard to plan big throws like that.It’s just something that you wait for to happen.What does it take to reach the top and stay there? We are doing the same stuff the Indians are doing: jumps, sprints, weightlifting stuff and throwing as well.Well, I don’t really enjoy the endurance training, like a lot of runs and stuff like that, but it also gives you a good feeling afterwards.I like it when the body is really f***ed up.I like it if you are really down after training so you know afterwards what you have done.It’s like a love-hate relationship.What were the sacrifices you had to make to reach this level? I come from Dresden in East Germany and I had to move to Offenberg, my current hometown, to work with my coach for seven years.

The two cities are 600-650 kilometres away from each other.I took a big step and it turned out to be the best decision of my life.

How often do you meet your family? After my mother died in 2018, my father, sister and her two kids also moved to Offenberg.So I am really close to my family now.My grandparents and all the others are still living far away but with WhatsApp, Facetime and Skype it is really easy to communicate with them.Who is the biggest fan among your family members? (Laughs).I think it’s my father.He is going crazy.

It’s hard to speak with him about private life especially in the season cause he’s like, ‘when are you throwing?’.And then he’s downloading all the competition videos on his computer to look at them many times.Of course, he’s really proud of me and makes me happy as well that he is my super supporter.Hardly difficult, then, to guess who you’re going to call first after your Tokyo event.

Yeah.I think I am going to first call up my father.Because my family is with me, my girlfriend as well.How did you deal with the loss of your mother? I would never give up and my mother wouldn’t like it if I had given up after she died.

I know that.I had some bad years because I had a lot of body issues in 2018.My mother died in the same year as well so I had some really hard and difficult times but I was able to come back.I was able to pull myself out of that hole and that’s why I am mentally so strong.

You have a good fan following in India.Your comments section is swamped with young Indian athletes asking for tips.Did you ever expect that? It’s maybe because Neeraj has done so well in the last few years that javelin is becoming more attractive in India.I am also the best javelin thrower currently in the world so they are cheering for me.

It’s like a co-production of Neeraj and me.Makes me proud that I have a good fan community also in India.I want to say hello to them and I really appreciate their love.Next time I will say something to them in one of the Indian languages.📣 The Indian Express is now on Telegram.

Click here to join our channel (@indianexpress) and stay updated with the latest headlines For all the latest Olympics News , download Indian Express App.- – The Indian Express website has been rated GREEN for its credibility and trustworthiness by Newsguard, a global service that rates news sources for their journalistic standards.-.