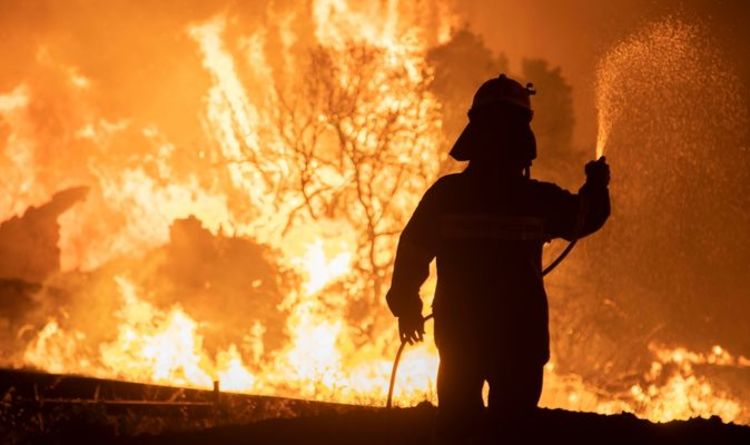 Coastguard and tourist vessels have rescued 631 people from three beaches on the island of Evia as horrific fires continue to burn through a large forest.The emergency operation began on the second largest Greek island, located near Athens, on Thursday evening.

Horrific wildfires have been blitzing through vast areas of pine for three consecutive days and reached dangerously close to the packed beaches.

He said: “The situation is out of control.The flames are more than 40 metres high.”

Church bells rang on the island throughout the evening to alert people of the threat.

Some 25 villages in the region have already been evacuated.

The piercing flames and thick black smoke could be seen from the outskirts of Athens throughout the night.

Temperatures in Greece have reached 40C (107C) in recent days and strong winds have fuelled the spread of the fires.

It comes as brutal wildfires have also spread across vast areas of neighbouring Turkey.

So far in Greece, at least nine people have been taken to hospital with varying degrees of injury.

Mr Mitsotakis delivered televised address on Thursday night and urged people to listen to the authorities and avoid unnecessary travel.

He said: “We are dealing with unprecedented conditions as many days of heatwave have turned the whole country into a powder keg.”

Earlier, Mr Mitsotakis visited an area in the western Peloponnese near the site of the ancient Olympic Games where emergency services fought to save one of Greece’s best known archaeological sites.

Fire crews, assisted by waterbombing fixed-wing aircraft and helicopters, had managed to control some of the blazes near Athens earlier in the day.

But the heat fanned the fires back into life, with flames crossing the motorway connecting Athens to northern areas and threatening more built-up areas.

Authorities ordered the evacuation of several inland suburbs to the north of Athens and moved a group of asylum seekers from the nearby Malakasa migrant reception centre.

The Civil Protection Authority has issued an “extreme fire warning” for half the country on Friday amid the heatwave.

Power cuts are expected in some parts of the Attica region around the capital.

Additional firefighters and aircraft are expected to arrive from France, Sweden, Romania and Switzerland..