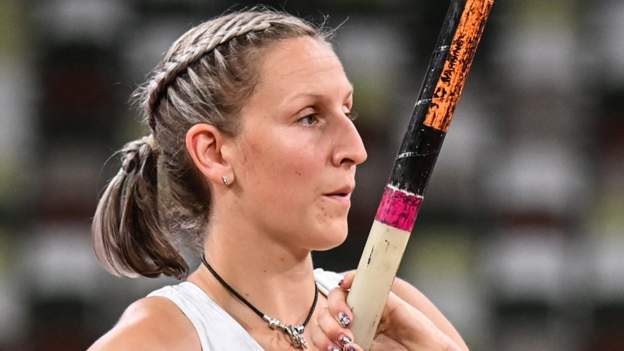 The 29-year-old, who finished fifth at Rio 2016 and sixth at London 2012, edged out defending champion Katerina Stefanidi as she cleared 4.85m.

But Bradshaw could not follow gold medallist Katie Nageotte of the USA or Russian world champion Anzhelika Sidorova over 4.90m.

The Chorley athlete looked initially disappointed, having cleared 4.90m in June for a new personal best, but was soon wreathed in smiles as she was congratulated by coach Scott Simpson at trackside.

“This is what I’ve worked for my whole career.I’ve had so many ups and downs.It’s something that I’ve just wanted, and wanted it so bad and it finally happened,” she told BBC Sport.

“I don’t know what emotion I’m feeling.Relief, pure enjoyment, just excited and proud of myself for sticking with it.I knew I could get it one day and I can’t express how grateful I am at getting an Olympic medal.”

Bradshaw’s medal is Great Britain’s 51st in Tokyo, equalling their total from Beijing 2008 with three days of events to go.

Olympic bronze is the culmination of almost a decade of near-misses and bitter disappointments for Bradshaw, having achieved a clutch of top-six finishes in major finals without making the rostrum.

The beginning of her 2021 season was less than ideal as she missed out on an expected European Indoor title before testing positive for Covid and isolating on her return home.

However, Bradshaw has spoken of her new mental resilience and, thrown into a high-quality four-way tussle with Sidorova, Nageotte and Stefanidi, she showed it.

Bradshaw shrugged off a failure at 4.80m and then screamed with delight as she succeeded at 4.85m on her first attempt.However, 4.90m proved beyond her.

Nageotte, who apologised to her mother down the camera lens after taking three attempts to get over an opening 4.50m, nailed 4.90m to take gold.

Sidorova, who made blemish-free progress all the way to that height, was unable to match the American.

The United States and Jamaica finished ahead of Great Britain with Poland, winners of the second semi-final, the other quartet to beat Team GB’s time.

Yeargin, who was disqualified from the individual event for a lane infringement, had been handed the baton after legs from Emily Diamond, Zoey Clark and Laviai Nielsen.

Elsewhere, Great Britain’s Jake Wightman broke off the front to lead home Kenyan world champion Timothy Cheruiyot and win their 1500m semi-final in 3:33.48.Josh Kerr and Jake Heyward made it three Britons in Saturday’s final for the first time since Seb Coe and Steve Cram completed a one-two at Los Angeles 1984, with third and sixth-place finishes in their semi-final.

Defending champion Matt Centrowitz and Poland’s Marcin Lewandowski, the sixth fastest man in the world this year, failed to progress.

Race walker Tom Bosworth felt he had put in his “worst performance in a British vest” after coming 25th in the 20km race walk in sweltering conditions in Sapporo.

The 31-year-old, who finished sixth in Rio 2016, was outshone by team-mate Callum Wilkinson, who came home 10th.

“I never got into the race.I never felt like I had any turn of speed, I was stuck in one gear and that was really disappointing,” said Bosworth.