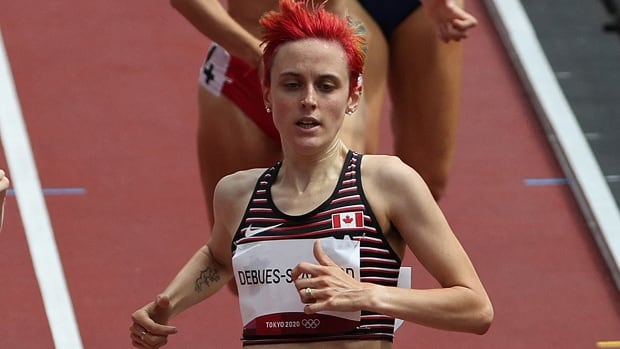 James Stafford will cheer on one daughter chasing her first Olympic medal but not before consoling another.

Canadian record holder Gabriela DeBues-Stafford clocked a season-best 3:58.28 in Wednesday’s 1,500-metre semifinal heats in Tokyo to advance to the 12-runner final on Thursday night at Olympic Stadium (Friday at 8:50 a.m.ET in Canada).

Her younger sister, Lucia, competed in the other semifinal and finished 13th overall in a personal-best 4:02.12 to fall 43-100ths of a second shy of Spain’s Marta Perez, who grabbed the last qualifying spot with a 4:01.69 PB.

Another Canadian, Damian Warner, was also ruling the field in Japan and sitting first midway through the men’s decathlon by 81 points over Ashley Moloney of Australia.Pierce LePage of Whitby, Ont., is 193 points in arrears of Warner in third after five events.

On the track, the 25-year-old DeBues-Stafford made a statement by taking the lead early in her semifinal over Japan’s Nozomi Tanaka through 400 metres.DeBues-Stafford would fall back to third after 800 behind Tanaka and defending Olympic champion Faith Kipyegon, and was fourth at the bell lap.

DeBues-Stafford made a move to third inside the final 400 metres and held strong in a fast race, crossing the line third behind Kipyegon (3:56.80) and Ethiopia’s Freweyni Gebreezibeher (3:57.54).

It was DeBues-Stafford’s fastest performance since she lowered her national mark to 3:56.12 in the world championship final on Oct.5, 2019.

DeBues-Stafford runs 800 metres in under 2 minutes in latest Olympic standard feat DeBues-Stafford, who moved to Portland, Ore., last September to work with renowned coach Jerry Schumacher at Bowerman Track Club, holds Canadian records in the mile, 1,500 and 5,000 outdoors and the mile and 5,000 indoors.

For Stafford, Wednesday’s PB was her second in three days after the 22-year-old engineering grad from the University of Toronto ran 4:03.52 to advance to the semifinals.She hadn’t run under 4:05.30 all season and clocked 4:09.61 in her final 1,500 before the Olympics at Canadian trials on June 27 in Montreal.

Hassan is scheduled to race the women’s 10,000 final at 6:45 a.m.ET in a field featuring Canada’s Andrea Seccafien.

Hassan broke the women’s world record in June, clocking 29:06.82, only to watch Letesenbet Gidey of Ethiopia got 29:01.03 two days later.

Ethiopia’s Letesenbet Gidey breaks 2-day-old women’s world record in 10,000 metres De Grasse, 26, is the first Canadian to win Olympic gold in the 200 since Percy Williams in 1928 and has reached the podium in all seven of his combined Olympic and world championship finals.

The Markham, Ont., runner won 100 bronze on Monday and will attempt to be a triple medallist in back-to-back Summer Games when the 100-metre relay competition opens Wednesday, with heats starting at 10:39 p.m.ET.

7:04 Toronto’s Aaron Brown, who is expected to join De Grasse in the relay, appeared in his first Olympic 200 final on Wednesday and was sixth in 20.20.

It was the first time since 1928 Canada had two men in the race.

Near the end of Wednesday’s race, De Grasse glanced slightly at Lyles to his left before running freely through the finish line, bursting into laughter, hopping and screaming in delight.He then laid down on the track to catch his breath and embrace the moment before rising to his feat and staring into a television camera, saluting his friends, family and Canadian fans.

“I love you guys,” said a beaming De Grasse.”Did you see Daddy [race]? I can’t believe it, oh my God.I’m coming soon, I love you.Have a good day.”

Gen Lalonde of Moncton, N.B., lowered her Canadian record time in the 3,000 steeplechase for the second time in four days, clearing 28 barriers and seven water jumps in 9:22.40 to place 11th of 15 competitors in the women’s final.

Genevieve Lalonde from Moncton, N.B., set a new Canadian record of nine minutes 22.40 seconds and finishes eleventh.13:50 The 29-year-old, who now lives in Victoria, reclaimed the mark with a 9:22.64 clocking in Sunday’s heats to beat the 9:27.54 posted by Regan Yee of Hazelton, B.C., at a World Athletics Continental Tour meet in Montreal on June 29, the final day of Olympic qualifying.

Lalonde reclaims Canadian 3,000m steeplechase record, advances to Olympic final Regan Yee races to Canadian record, Tokyo standard in women’s steeplechase Warner, 31, starred in the decathlon, topping his group in high jump (2.02 metres) and winning his 400 heat with a 47.48 SB to complete Wednesday’s action.The London, Ont., resident is slightly off his Day 1 pace from the prestigious Hypo Meeting in May (4,743) when Warner becoming the first person to win six titles and shattered his Canadian record in the process with 8,995 points.

Mayer’s world mark in jeopardy? “What he did in Götzis this year was quite unfathomable after training indoors at a hockey arena [through the winter].He has a real opportunity to break [Frenchman Kevin Mayer’s] world record [of 9,126],” CBC Sports analyst and former Canadian decathlete Mike Smith said ahead of the Olympics.

The 25-year-old first-time Olympian was second to Warner in Götzis and won bronze in his 2019 Pan Am Games debut after earning Commonwealth Games silver the previous year.

Damian Warner and Pierce LePage were both in medal contention after four of the ten decathlon events.0:50 Warner and LePage will compete in 110 hurdles at 8:16 p.m.ET followed by discus throw and pole vault.The event concludes with javelin throw (starting at 6:15 a.m.

In other Canadian results, Kyra Constantine didn’t make it out of the women’s 400 semifinals.The 23-year-old from Brampton, Ont., was 15th in her Olympic debut in 51.22 seconds and dropped 47-100ths of a second off her time in the preliminary round.

Ellenwood placed 11th at the Hypo Meeting in May and shortly thereafter set a PB of 6,314 points.

5 days ago 2:48 From collections to strange superstitions, Canada’s track and field athletes have some interesting quirks.2:48.