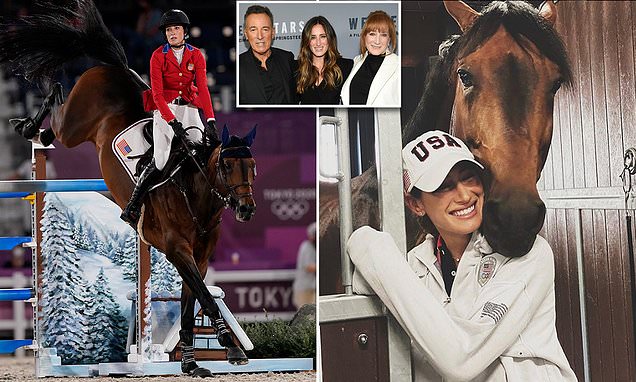 The US Equestrian team has advanced to the jumping finals at the Tokyo Olympics after Jessica Springsteen and her teammates placed fifth in the qualifying round today.Jessica — the 29-year-old daughter of rock legend Bruce Springsteen and his E Street Band wife, Patti Scialfa — will get her chance to take home a medal tomorrow with teammates Laura Kraut, 55, and McClain Ward, 45, both of whom already have gold medals from previous games.Neither Jessica nor her teammates managed to qualify for the individual jumping finals earlier this week, but they will compete together on Saturday against teams from Britain, France , Switzerland, Germany , Sweden, Belgium, Brazil , Netherlands , and Argentina.Jessica competed on a 12-year-old Belgian Warmblood stallion named Don Juan van de Donkhoeve.According to NBC News , she earned four penalty points for knocking down a rail on the 14-jump course, which took her 80.67 seconds to complete.Kraut also displaced a rail for four penalty points, while Ward had five penalties.With 13 points total, they placed fifth behind Sweden, Belgium, Germany, and Switzerland, easily making it into the top ten teams to move on to the final.

Though four equestrians came with the US delegation to Olympics, as per the rules, only three could compete, and Kent Farrington, 40, sat the competition out.

Team USA won silver in 2016, and bronze in both 2008 and 2004.Ward already has two gold medals and a silver and is competing in his fifth Olympics, Kraut has one gold medal, and Farrington has a silver.The group is sure to be relieved to be advancing to the team finals after none made it to the individual finals on Tuesday.Jessica, who is ranked 14 in the world in show jumping, reportedly had a strong start on the 14-jump individual qualifying course, where obstacles were adorned with life-sized sumo wrestlers, geisha kimonos, cherry blossoms, and even a miniature recreation of a Japanese palace.But her horse got uneasy around the 11th obstacle, and they earned four penalty points for knocking down a rail, ultimately missing out on one of 30 spots in the final.She tied for 31st place with 10 other athletes, including her teammate, Kent Farrington.

Teammate Laura Kraut did not make the individual final either, coming in at 44th, while McLain Ward did not compete at all.’All in all, I’m thrilled with the round and I’m excited for the rest of the week,’ Jessica told reporters after she was eliminated on Tuesday.Jessica previously gushed to Vogue about the excitement of going to the Olympics while laying praise on her teammates.’This has been my dream since I first started riding, so it all still feels surreal,’ she said.

‘My teammates are riders I’ve looked up to throughout my career, as well as former Olympians, so I’m really looking forward to sharing this experience with them.’It’s always an honor to represent my country, and to be doing so at the games is something in which I take great pride.’ She also opened up about her relationship with her horse.’Don is a really talented horse, and we have formed a solid partnership over the past two years,’ she said.’If there’s a weak point I might think we have, we will practice it at home, but mainly I’m just exercising him to get him in peak condition.’He has a lot of energy, so I work towards getting him as relaxed as possible, so he’s focused and we’re in sync when we compete.’ Though she’s no doubt looking forward to the rest of her time in Tokyo, she also said she can’t wait to get back home to her loved ones.’I am the most excited to go home and be with my friends and family,’ she said.

‘I wish I could share this experience with them, but I feel their support from home.’ Speaking to the Today show last month, Jessica said her Grammy-winning dad, 71, and musician mom, 67, ‘were so excited’ when she made the team after a lifetime of supporting her in the sport.’They were so excited.They’ve supported me since I was little, and this has been a huge dream of mine ever since I can remember,’ she said.’The sport has become such a passion for them as well, and we’ve been on this journey together, so they’ve been so proud of me, so happy,’ she added.

Jessica secured her spot on the four-strong squad during a competition in France in June.She was previously an alternate for the London 2012 team, but didn’t make the cut for Rio 2016.

Now on the team, she is thrilled to be with such experienced athletes.’I’ve admired these riders throughout my career, so to be named to the team with them is such a huge honor,’ Jessica said.

‘They have so much experience, they all have medals from the Games, so I’m really looking forward to it.’ Jessica, who is the second of Bruce’s three children with wife Patti, opened up earlier this year about her ‘dream’ of representing Team USA in an international championship, according to NJ.com .’My dream is always to represent the United States in championships, so I am definitely always working toward that,’ she said .’I feel like I have a really good group of horses jumping great right now, so I will just keep doing my best.’ Jessica, who has made almost $2 million in her equestrian career, is currently ranked third in the country.She clinched the Olympic spot last month in France when she won the 4* Grand Prix Hubside Jumping Tour with a top time of 36.16 seconds.

Shortly after the team announcement was made last month, Jessica celebrated the news on her Instagram Stories, where she re-shared a post from US Equestrian in which she and her teammates were named.Jessica, who graduated from Duke with a major in psychology in 2014, has been riding horses since the age of four.She trained on her family’s 368-acre farm in Colts Neck, New Jersey, after her parents relocated from Los Angeles in order to raise their children away from the prying eyes of the paparazzi.After she graduated from college, Jessica moved to Valkenswaard in the Netherlands so that she could focus on her sport.

Equestrian gold medalist Melanie Smith Taylor told the New York Post that the Jessica ‘has really come into her own this year.’ Smith Taylor, who won the top honors in 1984, previously said that Jessica has sought to carve out her own path in her sport.’She has said early on that she didn’t want to be known as Bruce Springsteen’s daughter alone,’ Smith Taylor said.Sadly for Jessica, her family is unable to watch her at the Olympics in person — and neither is her boyfriend, Italian rider Lorenzo De Luca.In order to maintain health and safety standards amid the ongoing pandemic, the International Olympic Committee has banned athletes’ family members and friends from attending the Games..