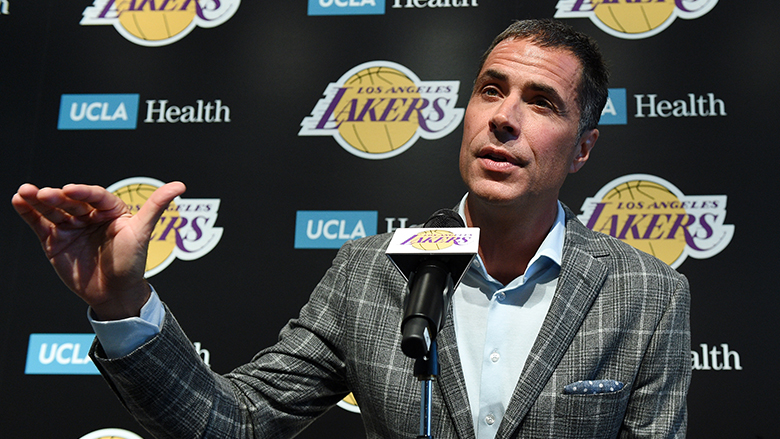 The Los Angeles Lakers are beginning the bargain shopping process in free agency with LeBron James, Anthony Davis and Russell Westbrook eating up the team’s cap space.As free agency begins, the Lakers are the early favorites to land both Rudy Gay and Dwight Howard.The Athletic’s Tony Jones reported Gay is believed to be “leaning towards the Los Angeles Lakers.” “Otto Porter Jr.and Rudy Gay are two players the Jazz hold interest in.

So, perhaps the Jazz can get one of them.But Gay and Porter are valuable role players on title-type teams.They are both versatile offensively, and they are the kind of long and athletic forwards that every team covets.So, competition for both will be steep.” Gay averaged 11.4 points , 4.8 rebounds and 1.4 assists while shooting 38.1% from behind the arc coming off the bench for the Spurs last season.

Howard was the top pick in the 2004 NBA Draft by the Magic.Howard’s Return to the Lakers Is Believed to be ‘Inevitable,’ Says Insider Howard continues to be linked to a Los Angeles reunion with Andre Drummond hitting free agency.NBA insider Marc Stein described Howard potentially landing with the Lakers as “inevitable.” Stein also mentioned Patty Mills and Wayne Ellington as two more possible additions as the Lakers look to fill out their roster with veterans.

“In addition to what many regard as the inevitable return of Dwight Howard for a third go-round in Hollywood, San Antonio’s Patty Mills and Detroit’s Wayne Ellington are two prime free agents of interest for the Los Angeles Lakers as L.A.hunts for bargains (and shooters) to fill out the rest of its roster after trading for Russell Westbrook,” Stein noted.“Keeping Alex Caruso, though, will be very difficult for the Lakers given their extremely limited financial flexibility in the wake of the Westbrook deal and the considerable interest Caruso is expected to generate.” The Lakers Have Been Linked to Several Additional Free Agents Including Anthony & Iguodala This coincides with what Los Angeles Times’ Broderick Thomas reported about Howard’s interest in yet another return to the Lakers.Veteran Jared Dudley already was recruiting Howard on social media to come back west.Thomas also mentioned Carmelo Anthony, Andre Iguodala and Trevor Ariza as other free agents with an interest in signing with the Lakers.“The Lakers need shooting,” Turner wrote.

“One name that is coming up is Patty Mills.He can shoot the lights out and would be great off the bench.Wayne Ellington is another shooter who has interest in rejoining the Lakers.Trevor Ariza and Andre Iguodala are veteran wings who are candidates.

Carmelo Anthony is interested, just waiting on a call from the Lakers when free agency opens Monday.Guess who might be back for a third time? Yup, Dwight Howard is ready to return and play center.

Jeff Green and Goran Dragic also are names to look out for.”.